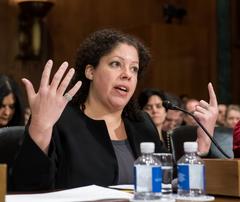 Lopez first discovered and raised the flag on such cases in 2012 with congressional leadership and administration officials. Rather than close the dangerous loopholes responsible, congress and the president made them permanent in 2013.

She regularly calls out both Republicans and Democrats by demanding protections for both natural-born and naturalized American citizens. She fails to understand why politicians put the needs of foreign nationals before those of their own U.S. citizen constituents.  Such political demands are not "anti-immigrant" or racist: Many of the fraud victims she's worked with for the past 15 years are people of color, Latinos, multi-racial, LGBTQ, first-generation Americans and naturalized U.S. citizens.

Lopez is biracial, Latina, and hails from the racially and ethnically diverse state of New Jersey.

For the past 15 years, Lopez has been contacted by congressional leadership, the White House, the Department of Homeland Security, the F.B.I., think tanks, attorneys, investigators and journalists looking for cases, background, data, research and national security trends regarding immigration fraud.

​Rampant immigration fraud was found in a 2019 congressional report with few checks and systems to catch such fraud. (GAO, 2019)