To add insult to injury, he became eligible for a special “domestic-violence green card."  This unique type of green card is coveted since it waives fraud, criminal activities and inadmissibility. And these green cards can’t be revoked even when flagged by national security investigators. Fast-tracked domestic-violence green cards go to any foreigner claiming they’re abused; No evidence, interviews or investigations are required. By law, Americans and their families are barred from submitting evidence of their innocence (or of criminal activities they uncover).

Lopez’s abuse? By refusing to sign his final immigration papers and reporting him to the feds, Lopez subjected her foreign husband to “extreme cruelty” based on the Violence Against Women Act (VAWA).  [See "Immigration Control as Abuse"; AllLaw]  The landmark domestic-violence law has become the easiest way for criminals and fraudsters to get fast-tracked green cards and U.S. citizenship. Congressional investigations recently confirmed widespread fraud. (Her whistleblowing triggered the investigation and report.)

In 2017, the DHS's new crime victim office refused to help Lopez in order to protect her ex-husband’s privacy rights.  Within months, the agency destroyed Lopez’s privacy and further compromised her safety: The DHS illegally put much of Lopez’s personal information on the Internet for anyone to search or download; It also gave that information to various media organizations. (Yes, the DHS further compromised the safety of a domestic-violence victim in hiding -- a woman that even DHS  investigators  fear has imminent threats to her safety.)

Meanwhile, Lopez’s former husband continues living openly in the United States.  Despite this man's clearly documented violence, criminal activities and fraud, the Department of Homeland Security gave a green card to someone the agency identified as “dangerous.” He remains eligible to renew his fraudulent green card or apply for U.S. citizenship, which he might have already attained.​​

In 2016, homeland security officials warned Elena Maria Lopez about the “dangerous man” she had married and sponsored into the United States.  Already forced to flee her own home -- after he tried to strangle her and pulled a firearm on her -- she already knew this.  And with the prior help of a retired FBI agent, she also knew she sponsored a criminal into her country. By the time feds issued this warning, she was already living in hiding with help from the State of New Jersey. ​

U.S. Senate Judiciary Committee   After six weeks of evidence collection and interviews with committee attorneys, Lopez was designated the lead witness for a U.S. Senate immigration fraud hearing in 2017. 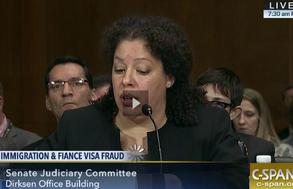